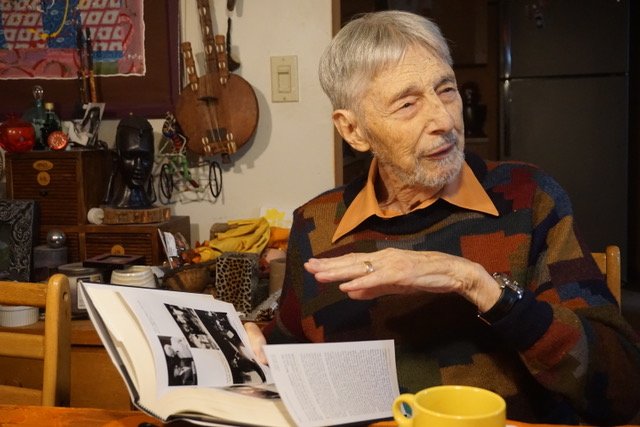 On the night of 8/31 to 9/1/18 Guenther O. Langner felt it was time to leave this life. He died peacefully in his home at the Beltrone, while “taking a nap”. His family would like to take this opportunity to share a little about his rich life.

The long life of Guenther Langner began in the Rhine Valley of Germany, where he was born on December 3, 1926 to Emilia and Erich Langner. He was an only child, and Guenther always used to describe his beloved mother as very protective of him - a la “if you do this (eg: ride a bicycle or drink water after eating a cucumber) “ dann must mann sterben” (ie: this is not good). Despite this, growing up as an “urbanite”, he had a childhood filled with culture - attending concerts, plays, and opera, and visiting art museums. His mother was a stage actress, and, although his father supported his family as an official at the Post Office, he was also an actor himself. Guenther was born into a family where, on both sides, many relatives were artists. This was always evident in Guenther’s creativity - for example, as a father he was often asked by us kids to make drawings that we could color - some of these likely deserved patents: can you imagine a baby carriage for eight that resembles a ferris wheel?!

Guenther’s high school education was interrupted by World War II, when, at the age of only 17, he joined the “Luft Waffe” (Airforce Signal Corps), to avoid having to join the “SS”. While stationed in France, he received a shrapnel wound to the back, and then was captured by US troops. As a POW, he learned to hate turkey and peanut butter, but not the US troops. He always told us that the Americans treated him well, especially as he could speak English and often served as a translator.

When the War ended, Guenther continued his education - apparently having decided at the ripe old age of 15 that he wanted to be a physicist! Guenther described himself as “lucky” (we would say “smart enough”) to have worked on his PhD thesis under Professor von Borries, coinventor of the modern electron microscope (his partner, E. Ruska, was later awarded the Nobel Prize for self and von Borries in 1986). Speaking of electron microscopes: there was Christel Irle, who attended the same university (the famous Kupferhütte) to earn her certificate as a technician in that field. Following the “laws of physics”, sparks flew, and they became man and wife forever in 1957. Notably, Christel quickly switched to an artistic path, and, like Guenther’s mother, became a professional stage actress.

Then came the kids: Petra (1958), Andreas (1960), and Miriam (1968) all conceived in Germany, but the youngest born a US citizen. Guenther had always wanted to be a university professor, but, for financial reasons, his life took a different path. He worked his whole career in Physics Research and Development, specializing in Optics (lasers and such), first for the Bayer and then Agfa companies in Germany, which he did not find “progressive” enough. This lead him, in 1967, to move his family to the USA to work for IBM, where he earned a number of patents and awards before his retirement in 1991, after which he continued as as a consultant.

Although he did not become a university professor, he was forever informally “the professor”. Anyone who knew Guenther would not be surprised to learn that he always fostered a quest for higher knowledge, especially in his three children. He always expected “straight A’s”, which we mostly achieved (with his help). Although his face showed some understandable disappointment when Petra managed only a “B” in his chosen field of Physics, he never scolded us and was always supportive of our efforts. He was proud of all three of us: Petra ended up with an MD and works as a Psychiatrist at the VA, Andreas was a Professor of Physical Chemical Engineering (polymers) at RIT, and Miriam has a Master’s degree in Education (including English and Outdoor Ed.)

What family today does not have some “dysfunctional” elements. For the sake of the “Celebration of Life” of Guenther, suffice it to say that there was a rather lengthy period of estrangement, triggered by needless conflict and misunderstanding. During this time, Guenther’s only son, Andy, died in 2011 during a struggle with cancer, not in communication with his parents. Then in 2012, Guenther’s wife, Christel, died, having stopped communicating with her children, with much pain in Guenther’s heart. He missed having been able to share in the achievements of his children.

Of course, when his wife died in Jan. 2012, Guenther missed her very much, and always remained surrounded by many memories of her, especially of her artistic talents: walls covered with her many paintings, a model he made of their home in Glen, NY, to which she had (selftrained) built an addition with a cathedral ceiling and a beautiful garden, drawings of costumes she had crafted over the years for local drama, opera, and ballet.

However, this end was also a new beginning for Guenther. He and his wife had been living for some time in a very rural area, with Christel having become increasingly asocial, while, as we all know, Guenther is a very social and vivacious person. Hence, he took the opportunity to move into the Beltrone, where he then thrived (he was the ultimate “late bloomer”socially). He eagerly sought out opportunities to be a part of groups of wonderful people, with whom he could share his knowledge, humor, and kindness. Everywhere you go, people will say “oh, Guenther, he’s such a nice and unique man”. He was a long-time member of the CDHS (secular humanist society), where he also gave a lecture on Physics, which included various gadgets which he constructed to demonstrate “basic” (to him) principles. He participated regularly in meetings of his book club and of the antique train club. On their wedding day, Miriam and her physician husband, Todd, presented Guenther with their wish and encouragement to travel. This wish came true in 2015 when Guenther joined them on a trip of a life-time, a river cruise down the Danube. There were many highlights, but none like experiencing firsthand a taste of real Viennese pastries (broad grinn!)

Guenther got to know many of the Beltrone residents personally, while serving as the Treasurer and, during the last year of his life, as the President of the Beltrone Tenant’s Board. He was always attending some meeting - “very busy”. He knew next-to-nothing about (American) football, but helped to make sure that the Superbowl party would be “super”, and each year, he enjoyed preparing for the infamous “white elephant sale” fund-raiser. He especially enjoyed getting together with his friends at the Beltrone, who will all miss him. One particular friend, David. F., who was also a WW II veteran, a few years ago invited Guenther to join him at a commemoration of the Battle of the Budge. Guenther responded with some hesitation “but I was on the other side”. David encouraged him - “it doesn’t matter, we’re all on the same side now”. The two have been best buddies since. Also, Guenther looked forward to regularly coming to have Sunday dinner with Petra and her husband, Jim (a history teacher), with simple but wonderful meals prepared by our local chef (Jim!). Guenther was a rather cultivated and picky eater. In particular, he prefered to avoid turkey and chicken, unless cooked to tender and juicy perfection, which, Guenther used to say repeatedly, only Jim could do. Then, what German gentleman could resist Jim’s home-baked desserts with plenty of whipped cream! It usually took some time for Guenther to finish his meal, as any occasion was a great opportunity for Guenther to be “the Professor”. Jim would jokingly say to him “take a bite” while Guenther told stories of his fascinating experiences, raved about the details of some model of automobile, discussed politics (yes, he was a “Bernie” supporter), or gave a lecture on some priciples of Physics - “it’s very complicated”, he would often say.

On the other hand, in an eloquent letter to the CDHS, he summed up life very simply: “As humans, we can live together without so much suffering only through compassion. This has to be built and maintained. The key to this is understanding, which, in turn, is based on knowledge, pursuing and finding the truth, and being courageous enough to accept the truth.” This is what Guenther felt was the basics of Physics as well as of Life.

Guenther leaves behind his younger daughter Miriam and her husband Todd Spencer, his daughter-in-law Linda Langner (wife of son Andreas) and their four adopted children, his older daughter, Petra and her husband Jim, and their daughter Chong-J and her husband Matthew Bretillon and the great-grandson, Marc-Alex. We will miss you and always fondly remember you!

All family members would like to give our special thanks to the professionals who took such wonderful care of Guenther during his last few months: Beltrone social worker Barbara S.; the “A Team” of around-the-clock aides (Robin, Leslie, Edith, Tena, and Yvette), who helped “Mr. Guenther” to feel comfortable and never alone, the PTs, OTs, anNs from the Eddy; and the homehealth care team of Dr. D. Heffernan.

All services will be private.

To order memorial trees or send flowers to the family in memory of Guenther O. Langner, please visit our flower store.