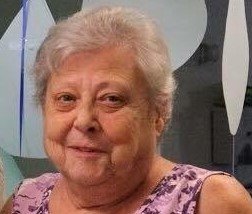 Watervliet- Jeanne D. Hartman died March 31, 2018 surrounded by her loving family.  Jeanne was the daughter of the late Thomas and Doris Stacey Bellow.   Jeanne is survived by her loving husband Ralph B. Hartman.  Ralph and Jeanne were married on May 18th, 1968.  Jeanne is the loving mother of Scott (Jessica) Hartman, Jeffery Hartman and Tracy (William) Jewett.  She is also survived by her grandchildren Wyatt and Riley Hartman, Katelyn Jewett, Alisa and Jared Hartman  and her great grandchild Emmett.  Jeanne is the loving sister of Thomas Bellow and Joyce Green, sister inlaw of David (Shirley) Hartman, Diane Hart, Debe (Mark) Symanski, Jim (Michele) Hartman and Shelia (Steve) Urban.

Jeanne was a social member of the Watervliet AOH, where she enjoyed many lasting friendships over the past 30 years. Fishing vacations at Black Lake, spending time with her grandchildren and family brought Jeanne much happiness. She will be missed.

In addition to her parents, Jeanne was predeceased by her sister inlaw Cathy Roy.

Family and friends are invited to visit with Jeanne’s family on Wednesday April 4th from 4-7 p.m. at the Konicek & Collett Funeral Home LLC.  In lieu of flowers, the family would appreciate memorial donations to Mary’s Kitchen 2417- 7th Ave. Watervliet, N.Y. 12189

To order memorial trees or send flowers to the family in memory of Jeanne D. Hartman, please visit our flower store.

At Jeanne's request, casual dress is encouraged for those attending the visitation.