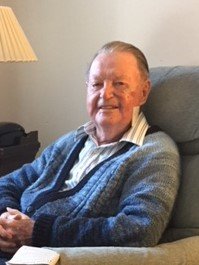 The Rev. Cannon John (Jack) Birdsall of Albany, NY, formerly of Amherst, NY, peacefully passed away on July 9, 2019, at Good Samaritan Nursing Home at the age of 93.

Jack was born and raised in the Detroit, Michigan, area. As a grade schooler, he and his twin brother Jim attended St. Thomas Choir School on 5th Ave. in New York City. Jack went on to graduate from Kenyon College in Ohio and subsequently earned his Masters in Divinity from the General Theological Seminary in New York City.

He was ordained an Episcopal priest in Buffalo, New York in February 1953, where he met the beautiful Antonina Brucato at the Buffalo Diocesan headquarters. After much effort on his part – she married him in January 1955. From 1955 to 1962 Jack and Nina were Anglican missionaries to Japan. They came back to the USA in 1962, and Jack joined Calvary Episcopal Church as Assistant Rector in Williamsville, NY. He went on to be Rector at St. Peter’s Episcopal Church in Eggertsville, NY from 1967 to 1980 and Rector of St. Stephen’s Episcopal Church in Eastern Shore, Maryland from 1981 to 1988. He assisted at St. Paul’s Episcopal Church in Harris Hill, NY from 1989 until he retired.

Jack was a minister of the Gospel, a man of intellect, who was disciplined and hardworking. At the same time, he was a lover of life, family and friends. He loved to read, and the newspaper comics gave him great delight and brought forth laugher each day! He was devoted to his golf and tennis buddies. Dad loved his kids and grandkids beyond measure. His love of Christ and devotion to family were the two pillars of a life well-lived.

Finally, Jack was thrilled when his great-grandchild John Samuel Birdsall came on the scene five years ago.

Jack had friends throughout the world – too many to list. But his missionary work helped Chisato Kitagawa, one of his oldest friends, come to the USA, become an Episcopal priest and a professor at the University of Massachusetts at Amherst.

Jack’s loving wife of 55-years, Antonina, pre-deceased him, so did his twin brother James and his brother Alan.

There will be two memorial services for Jack – one in the Albany area and one in Buffalo.

On July 27, 2019, at 11:00 am at Christ Episcopal Church in Greenville, NY (11266 NY RT-32), we invite family and friends to help us celebrate Jack’s life. Jack found this wonderful church and truly enjoyed each Sunday with his newfound friends.

On August 17, 2019, at 12 noon, there will be a memorial service at the church Jack served and attended for many years, Calvary Episcopal Church, 20 Milton Street, Williamsville, NY. Jack will be interred on the grounds of the church that day.

Instead of flowers, please consider a donation to the Episcopal Relief and Development Fund (episcopalrelief.org) or the Alzheimer’s Association (alz.org).

To order memorial trees or send flowers to the family in memory of John B. Birdsall, please visit our flower store.