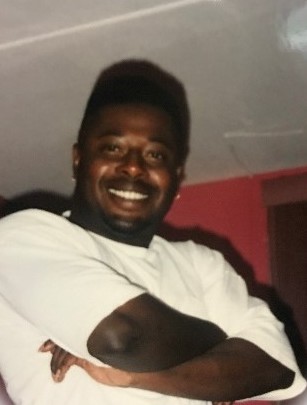 On December 7th, 2020 God saw a need to send for a new angel. He quietly touched Reginald (Reggie) Dorsey to bid farewell to this world. Reginald (Reggie) Dorsey was born on August 21st, 1965 in Morning Side Hospital Manhattan, NY to Richard and Hettie Dorsey. Reggie was the 5th addition to his family. Reggie grew up and attended elementary, middle and high School in Queens, NY. He was known for his bright smile, rambunctious sense of humor and smooth singing voice. He was loved by so many, near, far and in between. Reggie was the second youngest son. He is the brother of two older sisters, Priscilla Dorsey of (Lithonia, GA) and Rosanna Dorsey of (Greensboro, NC) and two older brothers Richard Dorsey, Jr of (New York), Gregory Dorsey of (Greensboro, NC) and his younger brother Terence Dorsey of (Greensboro, NC). He Joins his father Richard Dorsey and his dear aunt Mary Brown in death. Reginald Leaves to cherish loving memories: His firstborn son Reginald Spencer, two lovely daughters: Mia-Janee Dorsey, Alana Laniece VanNess-Dorsey and his youngest son Xavier Octavious VanNess-Dorsey. He also leaves his beautiful Granddaughters Zaida Davis-Daughter to Mia-Janee, and Shaniya Harrison to his son Reginald Spencer, A very special cousin Sharice Cohen of (Watervliet, NY) and a host of very special nieces, nephews, cousins, aunts, uncles and close friends.
To order memorial trees or send flowers to the family in memory of Reginald Dorsey, please visit our flower store.

Facial coverings and social distancing will be required.